Brady’s nursery is one of my favorite rooms, it is just so cheerful and gets a lot of afternoon sunshine (bad for nap/bedtime but that’s why we have black-out curtains).  Before he was born in our last house, we decided on a gray/yellow color scheme with a bit of an elephant theme.  But when we moved over to this house with him being a bit older (he’ll be two in September), we wanted to update it a little bit with a theme he could carry over to his big boy room one day.  So, we replaced his old yellow/white chevron print rug for a geometric print one with a lot of blues/grays in it, and have been adding some nautical themed prints into the mix.  I love yellow in a boy’s room so we incorporated a lot of the “yellow” items of decor mixed in with blues too so now we’ve got a blue/gray/yellow color scheme with a nod towards nautical. He still has an elephant side table and some elephant blankets (as well as his much loved “Ellie” elephant lovey), but it’s starting to transition into a bigger boy’s room instead of an infant one.

The biggest renovation in this room was a closet move.  Originally (and oddly placed) his closet was on the wall currently occupied by his dresser.  The wall is shared with the bathroom so his closet took up a lot of space inside our main bathroom.  Gavin knocked out that wall in the bathroom & his closet during the bathroom renovation and then moved Brady’s closet over to the corner of the room where it is now.  It makes the room feel more open, and it gives us at two walls large enough to put a crib on one and a dresser on the other without any windows or radiators to worry about blocking.  Gavin also replaced all the baseboard and door molding so you can see in the reno pics it’s all torn off.

Here’s how the room looked before & during renovation: 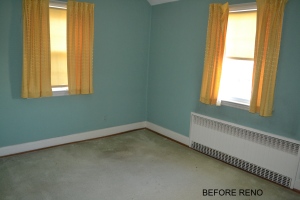 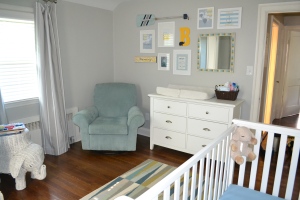 Here’s a close up of the gallery wall. Two of the three prints I made, see more about that here, along with the B from Michael’s with the elephant (a carry-over from the old theme).  The other 3 prints I purchased on Etsy.  Mirror & Sunshine plaque are from HomeGoods & the oar is from Target.  Over Brady’s crib are two prints we bought at Su Casa and had framed at Michael’s.  One is of the Baltimore harbor and the other is of Annapolis harbor.

Still on the to-do list for this room is hang Brady’s book shelves (on the empty wall to the left of his window)…his old ones don’t work in this new room due to spacing, but a Facebook friend suggested a DIY tip that I can’t wait to try and then share with you all once it’s complete.

May 2015 – Brady’s room is no longer a nursery – here’s a few pictures of his big boy room including the Ikea spice rack DIY hacks we used for bookcases (and I think they were less than $5 each!). 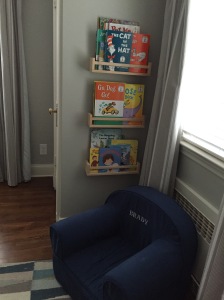 When trying to figure out the new lay-out for our kitchen, we didn’t have many options.  The old kitchen was small and only had a few cabinets, a fridge & a stove so we knew we’d need to expand.  The kitchen is situated between our dining room, our living room, and at the end of our entrance hallway.  We have a door that leads from our kitchen onto a covered porch…I dream of that porch becoming a screened in porch one day so I didn’t want to knock out that back wall and lose any of the porch.  If we knocked out any of the wall that the kitchen shares with the living room, we’d lose the main long wall that our chaise sofa is currently up against and we wouldn’t have been able to fit that in there.  Then the wall that’s being shared with the dining room is load-bearing.  We also have a door, and two windows to contest with along with a radiator that we couldn’t cover up.  So we settled on a galley style kitchen that’s a little on the small side but we love it!

Gavin removed the doorway between the hallway and the kitchen (there was a door that closed there and made the kitchen feel very small), he also opened up the the entrance between the kitchen and the dining room so the kitchen felt more open and spacious.   We went with white cabinets so that it wouldn’t feel crowded in there (and because I love them!) and decided to use Carrara marble for our countertops.   We added recessed lighting and crown molding as well.  The faucet we choose has an antique feel and works well with the farmhouse sink.  Stainless steel appliances and glass tile backsplash with some marble accenting completes the look.  Since the rest of the house has wood floors that we were refinishing anyway, we decided to run new wood floors in the kitchen too and have them all stained to match.  The color we choose for the kitchen is Benjamin Moore Woodlawn Blue.

Here’s some before and after pictures: 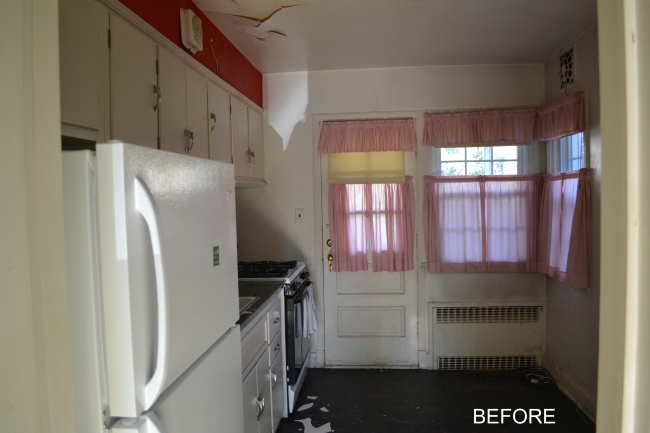 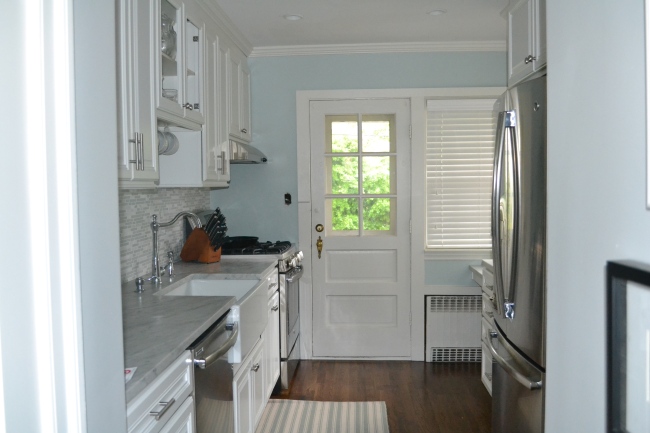 Like all the rooms in our house, our entranceway is evolving too.  We have some accent pieces there that sort of landed there on moving day and I’ve kept them there for lack of a better option at this point.  I’d like to find a small quatrefoil mirror to hang above the blue accent chest and I’ll probably move the accessories around but you can see how the refinished floors look, as well as how our staircase turned out with the painted risers.  We updated the pendant light and painted the walls Benjamin Moore Stonington Gray.  We also added crown molding which is painted in White Dove (so are the risers). 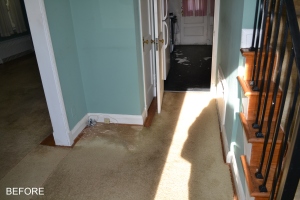 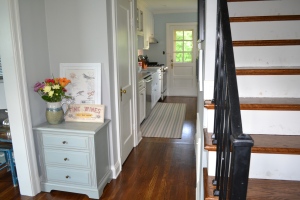 There’s nothing like driving up to your house and falling in love with it all over again!  Curb appeal is a major component to that feeling and our house just didn’t have it when we bought it.  Here’s our list of TO-DO’s as far as the front exterior is concerned (the back is a whole other project that I’ll get to in a future post) and you can see what’s been crossed off the list and what’s left to do still:

2. Landscaping: removing all the old bushes and putting in new bushes, annuals, perennials, and a tree (possibly Crepe Myrtle)

4. (We choose a light gray but one day I may change this to something more bold like a red.  I knew I didn’t want to keep it white and I wanted to keep it neutral for now since this is the original door and we had to sand it down and apply a few coats).

9. Expanding and paving the driveway (it’s very narrow and hard to get our son in and out of the car when parked there)

Here’s the updated image.  We’ve hung flags and added a few flowers, mostly in pots until we figure out our landscaping plan and come up with the money to complete it.

Back in January we purchased a gem of a house, a diamond in the rough for sure.  A colonial style house built in 1943 in a charming historic neighborhood.  Previously owned by an elderly lady, this house needed lots of repairs & updates.  Since this is our second home renovation, we knew what we were […]